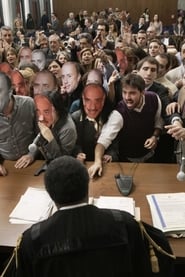 Kijk nu
In Shifting Sitting, Mik continues to reflect on the various faces of democracy in Europe. The figure of Berlusconi and the collapse of the boundaries between politics, jurisdiction and the media are key elements of the work. Shifting Sitting was filmed in Rome’s EUR quarter (Esposizione Universale di Roma), which was built by order of Mussolini in the late 1930s. Presented on three separate screens, the video installation focuses on different types of gatherings, in which it contrasts rigid with more fluid structures. The scenes are set in a court of law, where five men (businessmen or politicians, some of whom bear an uncanny resemblance to Berlusconi) are being questioned. The complete cast comprised some 120 actors and extras.