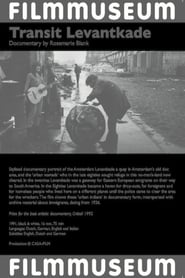 Kijk nu
Stylised documentary portrait of the Amsterdam Levantkade area and the 'urban nomads' who in the late eighties sought refuge in this no-man's-land now cleared. The film tells the story of the Levantkade, a quay in Amsterdam's old doc area. In the twenties Levantkade was a gateway for Eastern European emigrants on their way to South America. In the eighties Levantkade became a haven for drop-outs, for foreigners and for homeless people who lived here on a different planet until the police came to clear the area for the wreckers. The film shows these 'urban indians' in documentary form, interspersed with archive material about immigrants, dating from 1926.